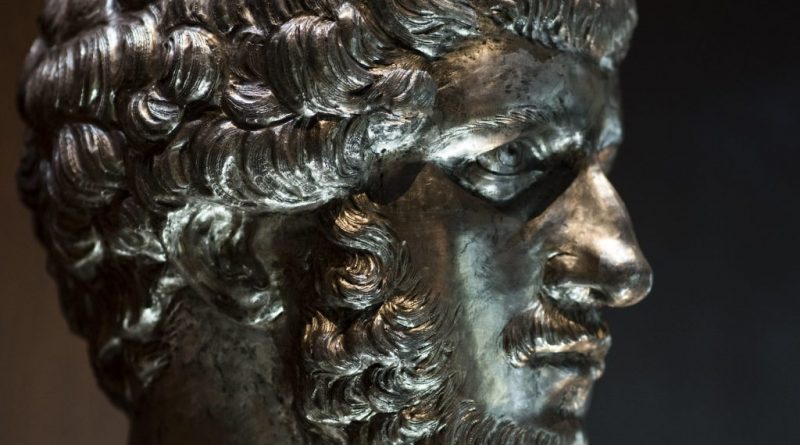 In April 1928, at the Pederbona farm, near Alessandria, in southern Piedmont, some farmers found a wooden box. Inside, they found a set of silver objects. The pieces were caked and cut to be inserted into the box. There is quite a bit of darkness about the location of the treasure as a whole. The weight of the Treasure, once passed into the property of the Italian State to be exhibited in the Archaeological Museum of Turin (1936), was almost 13 kg. compared to more than 20 kg. which was eight years earlier. Another suspicious piece of information emerged in 1951 when was published the news of the existence of some roman pieces found in Marengo, in a private collection in Cairo, which belonged to the shipowner Karkathopoulos.

It is not easy to date the Marengo treasure because of the little archaeological circumstances in which it was discovered. However, the treasure has been dated to the late 2nd century AD. and 3rd century A.D. As for their concealment, the fact that the pieces were cut and burned makes it unlikely that they were hidden by their owner. The most widespread opinion is that it was part of the spoils of a looting. Its concealment is believed to have occurred between the middle of the 3rd century AD. and early 5th century AD In the first period there was looting during the invasions of Franks and Alemanni. In the second moment it could happen when, at the beginning of the fifth century of our era, General Stilicon rejected Alaric’s Visigoth attack on Mediolanum (Milan).

THE TREASURE OF MARENGO

Specialists believe that Marengo’s treasure could come from a sanctuary that was looted. Many of the pieces are coatings that decorated statues or their bases. Most of the objects could have been votive gifts or ceremonial use.

The main piece is the bust of Emperor Julius Vero (161-169 AD), son of Marcus Aurelius and co-emperor with his father. It is possible that this imperial bust suggests its location in a sacellum or in a college dedicated to the imperial cult. In the portrait, the emperor appears in armor decorated with scales and the Medusa in the center of the aegis.

The silver band is one of the objects that generates the most debate among scholars about its iconography. It is believed that the sixteen figures that appear in the band could be Greco-Roman deities. This frieze must have been part of the base of a statue or a puteal.

Other pieces that make up the Treasury are the votive table with the identification of Fortuna Melior, a female statue identified with Victoria, a kalathos, decorative elements of a Roman divan (kline), frames and plates decorated with geometric and floral motifs, etc.