Lugo is located in the Northwest of Spain, being the capital of the homonymous province. It is located on a gentle promontory next to the river Miño. Lugo has very interesting samples of the Roman presence in these lands, especially the Roman wall, declared a UNESCO World Heritage Site in 2000 and the only one of the Roman Empire that is preserved in its entirety in its almost two and a half kilometers . Other places of interest are the Domus de los Mosaicos and Mitreo, the thermal baths, the swimming pool or the Roman bridge.

After the end of the Cantabrian Wars (25-19 BC), between 15 and 13 BC, the imperial legate Paulo Fabio Máximo founded the city of Lucus Augusti, on behalf of the emperor of Rome, Augustus. Lucus Augusti was the capital of one of the legal convents that made up the province of Gallaecia together with Asturica Augusta (Astorga) and Bracara Augusta (Braga). Its importance was marked by the gold mines of the province, which were an inexhaustible source to maintain the coffers of the Roman Empire. The political instability of the end of the 3rd century AD, and in the face of the strength of the Germanic tribes, led to the construction of a 2,226 m wall. that surrounded the city. The collapse of the Roman Empire facilitated the creation in Gallaecia of the kingdom of the Suevi, one of the first kingdoms in the Iberian Peninsula after Roman rule.

The Roman Wall was crowned by 85 semicircular towers, of which 71 cubes are currently preserved. Among these, the A Mosqueira cube, which preserves part of the first floor of the tower, deserves special mention. The average thickness of the walls is six meters and the walkway, the upper promenade, is between eight and twelve meters. It was built with pieces of slate joined with an excellent mortar, giving it an extraordinary solidity. At present it maintains ten gates: five old and five new, open with the expansion of the city. Among the access doors, the Porta Miñá, one of the original Roman doors, stands out. The walkway of the ramparts is accessed by stairs built in the 18th century, the original entrances being closed. It also has a ramp access, ideal for disabled access or baby seats. It is worth accessing this walk and enjoying the wonderful views of the city that we can get from it.

In Praza do Campo the Interpretation Center of the Wall has been located. In its three floors the construction characteristics of the wall, the changes experienced throughout history, or the vicissitudes related to its choice as a World Heritage Site are explained to us.

The House of mosaics (Batitales) is located on Doutor Castro street, behind the Plaza Mayor. They are the remains of a large domus, near the forum, built between the 1st and 2nd centuries AD. and inhabited until the 5th century AD. It was discovered when a building was built on the site, putting the archaeological remains obtained in situ. The oecus, a 150 m2 reception room, had excellent mosaics and decorative paintings on the walls. You can also see the hypocaust, the heating system of what would possibly be an imposing mansion belonging to some illustrious Lucus Augusti character.

The Porta Miñá Hall, located on Rúa do Carme, outside the city walls, near Porta Miñá, houses a permanent exhibition of Roman Lugo. Among the objects exhibited, a theatrical mask stands out, and remains of mosaics and wall paintings found in the archaeological excavations of the city. The exhibition has an audiovisual in 3D, which shows us the main archaeological pieces of Roman Lugo.

Also outside the walls, near the Puerta San Pedro, is the Archaeological Center of San Roque that houses, in situ, the remains of a Roman necropolis from the 1st-5th centuries AD. Burial and inhumation burials and a ritual pond (1st – 2nd century AD) linked to eastern deities are preserved. Traces of a kiln dedicated to the production of ceramics have also been found. The museum has four audiovisual and audio guide systems in various languages.

In the Praza de Santa María an archaeological window was inaugurated in November 2011 that will allow us to enjoy the view of the Roman pool found in the basement of this square in Lugo. Initially discovered in the sixties, it was covered over to guarantee its preservation until its rediscovery in 2004, at which time the museumization works began. It is a pool from the 4th century AD. with two apses, one of them with a step to access it. It is believed that this pool would belong to the frigidarium of a thermal complex or a domestic balneum.

In the Vice-Rectorate of Lugo, near the Puerta de Santiago, the remains of a Roman domus and a temple dedicated to Mithras were discovered in 2000, dating from the 3rd century AD, in the time of Caracalla (211-217 AD). The Mithraic temple was built on a domus from the 1st century AD, identified thanks to a commemorative inscription dedicated to Mithras made by Gaio Victorio Victorino, centurion of the Legio VII Gemina and in charge of collecting taxes in Lucus Augusti. Part of the domus was later rendered useless in the late 3rd century AD. to allow the construction of the wall. In July 2013, the Domus do Mitreo Museum was opened to the public, where you can see the foundations, the courtyard, a well, the sewage system, and part of the original mosaics and wall paintings, as well as the remains of the temple. of Mitra, where its granite altar stands out.

Next to another of the access gates to the city, the Puerta del Obispo Aguirre, are the vestiges of a Roman temple, attached to the building of the Círculo de las Artes.

The Roman Baths were declared a historical-artistic monument in 1931. They are located within the facilities of the Hotel Balneario, on the banks of the river Miño. They are freely accessible, although to visit them one must go to the hotel reception. They were built around 15 BC. The best preserved part of them is the apodyterium, or wardrobe. It is a large room, built in opus signium, and two other rooms with urns created on their walls, where the Romans left their clothing. You can also see another room, whose function was that of a bathroom.

On the river Miño, as it passes through Lugo, a Roman bridge rises that is still used today. It is 104 m. long and 4m. wide. It was part of the Via XIX that linked the city with Bracara Augusta (Braga). Both in the Middle Ages and in the Modern Age it has undergone several modifications, the last one in 1893 when its appearance was enlarged and modified considerably, although maintaining its Roman bases and structures.

On the other hand, the beginning of the works of the new Museum of the Romanization of Galicia, which will be located in the old San Fernando barracks, will take place when «economic reality allows it», according to sources from the Xunta de Galicia in May last year (El Progreso).

At the end of June, the Roman festival ARDE LUCUS is celebrated for a weekend (see article viatorimperi). For three days the city dates back to the times of ancient Lucus Augusti, finding in it a market or macellum, the temple of Vesta, the Roman camp of the Cohors III Lucensium, or the Praetorian Guard, military camps like those of the Galician Mercenaries, Galician Trebas and Lucus Augusti’s Castra. In its latest edition, the festival brought together about 650,000 visitors who were able to enjoy the two hundred scheduled activities, among which we can highlight the gladiatorial combats and samples of military tactics carried out by the historical recreation group Ars Dimicandi or the parade of the Roman troops and the Castro tribes. The little ones have a good reason to have fun in the many activities they can do in the Castra de Lucus Augusti, such as riding a horse, creating a mosaic, or passing a military training to become a young Roman legionary … The edition of this year 2019 will take place between June 14 and 16.

In Praza Maior, we must not fail to contemplate the sculpture of the «Triumphal Arch», the work of Ramón Conde, winner of the contest held in 2006 to erect a monument commemorating the founding of Lucus Augusti. It represents the founder of the city, Paulo Fabio Máximo, receiving this order from the Roman Emperor Augustus.

Another interesting modern sculpture, commemorating the Roman past, can be found in the Plaza de Santo Domingo. In 1976 a 20m column was erected. tall crowned by an imperial bronze eagle. The anecdote of this sculpture is that, initially, an eagle had been erected at rest, which is why it was quickly called by the population as the dove (pombo in Galician), which is why this monumental complex is also known as the Columna del Pombo . Another Roman monument, from modern times, is the milestone, built in 2007, which commemorates the legal convents of Galatia: Lucus Augusti (Lugo), Bracara Augusta (Braga) and Asturica Augusta (Astorga).

WHERE TO EAT IN LUGO

Lugo is one of the best places in Spain to eat and have tapas with an excellent value for money. The traditional dishes of Lugo cuisine are lacon with turnip greens, Galician empanada, Galician soup or the unavoidable octopus a feira. The latter is cooked in large copper pots, cut with scissors and salt, oil and hot paprika are added. Another representative dish is the carne ao caldeiro, cooked calf skirt marinated with natural oil and peppers and accompanied by boiled potatoes. We also have four cheeses with designation of origin: San Simón da Costa, from Tetilla, from O Cebreiro and from Arzúa-Ulloa; and three liqueurs, also with their own name: coffee liqueur, Galician marc and Galician herb brandy. To accompany these foods we can drink a Ribera Sacra wine, denomination of origin of the area.

And where can we enjoy all these delicacies? Fortunately, Lugo has a wide range of restaurants to choose from. We opted for Curruncho A Nosa Terra (Rúa Nova, 8), a magnificent restaurant with a really exquisite octopus.

In our visit to Lugo there are two places, in its vicinity, that we should not miss: Santa Eulalia de Bóveda and Castro de Viladonga, in both cases located less than 20 km away. from the capital of Lugo. 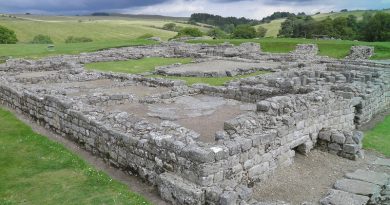 THE ROMAN FORT OF VINDOLANDA 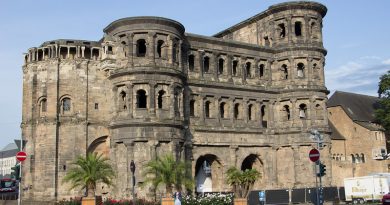